On Tuesday December 8, 2015 Copa Airlines (Compania Panamena de Aviacion) made its maiden voyage from Panama to Belize signalling the commencement of direct airlift services between those two countries. 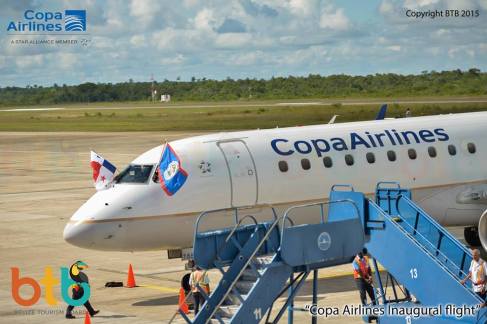 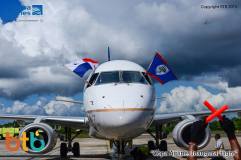 The following is a press release from the Belize Tourism Board (BTB) outlining the events of the day:

Belize City, Belize – December 8th, 2015 Copa Airlines today made its long awaited inaugural flight to Belize; its 7th destination in Central America. Flight 281 arrived today at 12:49 P.M via Hub de la Americas Panama City, Panama carrying a total of 92 passengers. The flight kicked off in Panama with a team of news media from different countries in South America to cover the historic event. The flight was greeted by a water salute, and passengers were welcomed with entertainment from Laru Beya Boys and Travellers Rum cocktails.

Said Pedro Heilbron, Executive President for Copa Airlines stated: “For COPA Airlines this is a very proud moment for us to begin operations in this new destination with which we consolidate our leadership in the region, flying to all the countries in Central America and in this fortifying the connection that Hub de Las Americas in Panama City offers.” “With our flight to Belize we expect to amplify the opportunities of development in the business and tourism sectors in this city, while improving in an important manner the connectivity of the country to Latin America.”

The arrival of COPA to Belize marks an important landmark as it will establish a connection to the South American market and beyond via the Hub de Las Americas in Panama City. The flight is scheduled twice a week on Tuesdays and Fridays Departing Panama at 11:29 A.M, arriving at 12:52 P.M. The departure flights are scheduled on the same days leaving Belize City at 2:17 P.M. and arriving in Panama at 5:34 P.M, flights are scheduled to last approximately 2 hours and 20 minutes each way. With the addition of Belize COPA now has a flights to a total of 74 destinations in 31 countries in The Caribbean, North, and Central & South America.

At the inaugural ceremony Hon. Manuel Heredia Jr., Minister of Tourism and Civil Aviation,stated: “Though our strongest market remains North America, we see the need to expand our reach southward, as a part of the long term strategy towards diversification, as charted in our National Sustainable Tourism Master Plan. As a result, COPA and Belize have partnered and have committed to investing the essential time and resources needed to develop an invaluable relationship, which will serve as the catalyst for attracting South American tourists to Belize, and in turn result in the expansion of Belize’s tourism industry.”

More photos can be seen on BTB’s Facebook page.

For more information on the Belize Tourism Board, please contact: