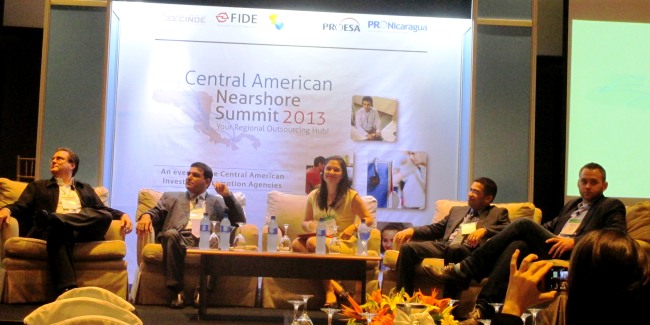 Nicaragua inaugurated the first annual Central American Nearshore Summit (CANS) November 7, 2013 with the participation of over 160 businessmen mainly from the U.S. and the Central American region. The event was centered at promoting the entire region as an outsourcing destination due to its various competitive advantages; among them its competitive cost structure, strategic location and cultural affinity with the U.S.

The highlight of the event was the first session of business meetings held between service providers and buyers of the region. These previously scheduled meetings represent a unique opportunity for foreign and regional companies as they allow the establishment of key contacts and alliances within the outsourcing industry.

Additionally, there have been plenary sessions mainly on the current state of the industry, and investment opportunities offered in Central America, as well as outsourcing challenges of the region. Representatives from each Central American country were also able to highlight individual competitive advantages from their country in the plenary session “Meet the Agencies”. Other topics addressed during CANS include nearshoring social responsibility and success stories of companies established in the region.

Some of the industry experts that spoke at the event are Bert Quintana, President and CEO of Sitel, who is responsible for directing the company’s strategic growth and expansion; Atul Vashistha, Founder and Chairman of NEO Group, a leading global service and outsourcing advisory and supply monitoring firm; and DJ Edgerton, Founder and CEO of Zemoga, who was ranked in 2013 as #10 in Nearshore America’s Power 50 Most Influential Executives.

On the second day of the event, the program was fashioned in such a way that it facilitated another set of plenary sessions by international and regional industry experts and a second business meetings session, as well as a site visit to Accedo Technologies, a Business Process Outsourcing (BPO) company with specialty in call centers and contact centers; and to PatentVest, a Knowledge Process Outsourcing (KPO) company dedicated to patent processing operations.

CANS was coordinated by the investment promotion agencies of five Central American nations aimed to present the region as a competitive, unified and attractive outsourcing destination: CINDE (Costa Rica), FIDE (Honduras), Invest in Guatemala (Guatemala), PROESA (El Salvador) and PRONicaragua (Nicaragua). This is the first time these agencies have ever joined to promote the entire region as a destination for investment.

BELTRAIDE participated as an IPA representing Belize in the Central American region in order to collaborate with the Central American countries in promoting the nearshore region holistically. For more information on Belize’s BPO industry, feel free to visit BELTRAIDE’s website at http://www.belizeinvest.org.bz

Hero Balani is one of the Business Development Officers at BelizeINVEST, BELTRAIDE, the official investment promotion and generation agency in Belize.