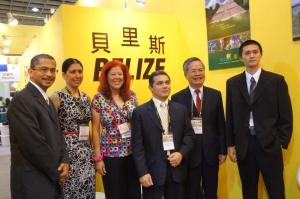 Belize’s presence at the Taipei International Food Show was made possible through the facilitation of Central America Trade Office (CATO) in Taiwan. Apart from showcasing a wide varieties of made-in-Belize products, the 2012 Belize delegation also comprised of a shrimp producer (Royal Mayan Shrimp Farm), and a hot pepper sauce producer (Hot Mama Belize). Both enterprises have received favorable feedback from the attendees at the Show. Moreover, both enterprises have engaged in dialogue with a number of attendees demonstrating keen interests to import their goods.

In summary, the Show provided vast opportunities and opened gateways for current and potential trades between Taiwanese buyers and Belizean companies. BELTRAIDE sincerely believes that this year’s participation in the Show has been a success!