The new year is ripe for papaya promotions 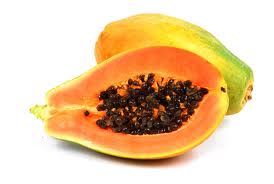 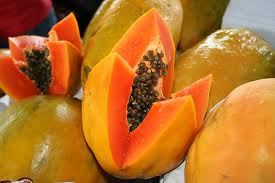 Papayas may be getting their day in the sun at last.

“Interest from retailers in papayas is dramatically higher than a year ago,” says importer Eric Crawford, president of Sunrise, Fla.-based Fresh Results LLC, which has doubled the size of its operation in Belize over the past year.

“People are looking for new super foods, high in antioxidants,” Crawford says, “and the media is picking up on the fact that the papaya really has a lot of nutritional value.”

Both Brooks and Fresh Results grow the large, orangey-red tainung variety. Crawford says that, unlike Mexico’s maradol variety, which makes up more than 80% of the papaya market, the tainung is mature when the skin is still green.

“We have to convince the consumer that, while the skin may not be as yellow as a Mexican maradol, the flavor is sweeter and the fruit is ripe,” says Crawford, a fan of in-store sampling programs.

“Royal Star does not have to be fully ripe to eat,” said Wolverton, who’s working with retailers on point of sale materials for the thicker-skinned hybrid with a 12 to 14-day shelf life. “In fact, it’s already sweeter at 50% ripeness than others that are fully ripe.”

Retailers who display a cut half with the whole fruit have greatly increased their sales, he says.
Ostlund urges retailers to keep the color and excitement of the holidays going all winter.

“Hit the New Year with waves of bright tropical color,” she says. But don’t stop there. “If dry cleaners can have a Valentine’s Day promotion for red clothes, why not have a red promotion in the produce aisle with apples, strawberries and more?”

A papaya half packaged with a slice of lime and a spoon makes a healthy breakfast or lunch to go. Cross-promote it with salsa, smoothie and salad ingredients.

“We’re been experimenting under the radar for about four months,” DiCesare says, “trying to get the right ripeness and pressure readings and seeing how customers respond. Initially, it looks good.”
Selling ripe, ready-to-eat Caribbean Reds year-round have boosted sales at Lakeland, Fla.-based Publix Super Markets Inc. “We have seen positive results across all divisions and among many demographic groups,” says category manager Curt Epperson.

When papayas are plentiful, Epperson merchandises them prominently through the produce department, and the chain’s Apron’s department uses papayas as an ingredient in its Meal Ideas. Point of purchase material is also key to increasing sales.

Price is definitely a factor in sales, Shellikeri says. Like Loblaw, Wegmans sells papaya by the piece rather than by the pound, but DiCesare says he may reconsider his strategy. While his $3.99 maridol can easily weigh four pounds, his competitors sell theirs for 99 cents a pound, he said, which makes his price “read high.”
Loblaw stores with a higher concentration of ethnic customers list both the “jumbo” formosa, tainung and maradol varieties and the “personal size” solos, Shellikeri says. Discount banners carry smaller specs of each, and promotions bring incremental gains in sales and tonnage.

Shellikeri says he’s seeing more interest in papayas from all groups. “There’s still not a great degree of awareness about the nutritional value of this fruit, hence it remains classified as an ‘ethnic’ fruit.”

The papaya’s unique smell and flavor, which newcomers such as Royal Star are addressing, can also keep some customers away, Shellikeri says. Looks also matter. With Hawaii poised to increase its sales to the mainland and Japan, the Hilo-based Hawaii Papaya Industry Association notes that the natural “freckles” on a Hawaiian papaya indicate sweetness, rather than a disease or pest problem.

Because papayas sell best with color and when naturally ripe, they’re a challenge to handle from the growing region to the store, Shellikeri says. Maintaining temperature and humidity levels is critical throughout the value chain. Epperson says Publix is able to offer mature fruit and turn it quickly through a 5 to 7 day delivery to its stores.

On his wish list for things growers and shippers could do better, Shellikeri would like to see more varieties that can travel well and mature uniformly, without compromising taste, and consistent supplies on different sizes. He also sees the need for marketing campaigns to educate customers about the health benefits of papayas and how to select and prepare them, with sampling and recipes. As well, he says produce and quality assurance managers need more training and workshops on how to handle papayas.

Homero Levy de Barros, president of Pompano Beach, Fla.-based HLB Specialties, believes retailers should go big or go home when it comes to the exotic fruit. Displaying a half dozen unripe papayas in a basket will never lead to increased sales, says the Brazilian-born importer, who’s worked with the exotic fruit for more than 20 years.

He favors promoting papayas as fruit of the week and greeting customers with a big display of ripe papayas. “The public doesn’t know what to do with it,” says Levy de Barros. “Reduce the price to entice people to try the fruit, offer them a sample and go heavy on education. If you give them a good eating experience, they’ll come back for more, and you won’t have to worry about shrink.”

5 thoughts on “The new year is ripe for papaya promotions”